Second half of September

September has been rather slow when compared to the coverage I’ve done in previous months, but my column has returned to its weekly place. In the second half of the month two pieces have been published. The first looks at El Salvador’s president Nayib Bukele’s September 15 announcement on running for re-election, which is illegal according to the country’s constitution. This piece can be read here.

The final article for September looks at how attacks on the press have increased in Costa Rica in the new government of president Rodrigo Chaves Robles in the months since he took office in May. Something new for the country, which is widely seen as being the most stable democracy in Central America. This piece can be read here.

I am going to be updating the website more in the next few weeks. Keep an eye out for the changes.

I’ve started every update off with the same sentiment… I really need to update this website more. This month has started off slow. While there are a lot of things occurring in Guatemala, I’ve not been able to finish up the pitches I have in mind. They will come together at some point or another.

At the beginning of the month I finally succeeded in writing a piece for Foreign Policy Magazine. I’ve wanted to write for them for years. The piece looks at the lack of state led re-integration and response protocols for Guatemalan migrants deported from the United States. The piece is built off my visit to the deportee reception center in June of this year.

This month I have also published two articles for my now weekly column The Other Americans over at the website of the Progressive Magazine.

The first piece looks at the eviction of Q’eqchi Mayan residents of a land occupation in Alta Verapaz, which I had visited in October 2020. After nearly four years of fighting for the land where many of the occupiers were born, the nearly 58 families were evicted by the police. There are few options for them of where to go… and in the region many are seeking to migrate to the United States. https://progressive.org/latest/other-americans-guatemala-religious-narco-state-abbott-091422/

The second piece looks at the rise of the influence of evangelical groups in the politics of Guatemala, and how these far right groups have made alliances with drug-trafficking groups. The result is there is a construction of a religious-narco state in process in Guatemala. https://progressive.org/latest/other-americans-guatemala-religious-narco-state-abbott-091422/

At some point I will update the site with all the pieces I’ve published this year. There are so many… Or at least post the best of the best. Keep an eye out. I am going to do my absolute best to update the site more often.

I took most of December off due to exhaustion. I did produce one report for Al Jazeera that aired last weekend. Video is by my friend Santiago Billy, with voice over by John Holman. Please take a look. Now that 2021 has begun I should be getting back to coverage. Keep an eye out here for pending updates and new work. 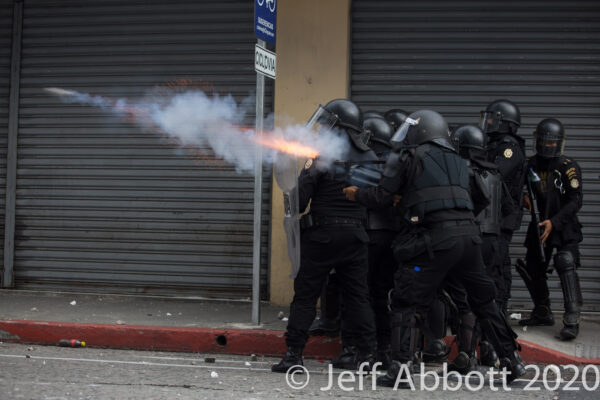 This photo is from the November 21, 2020 protests in Guatemala City shortly after a part of the congressional building was set on fire. I sadly wasn’t able to publish anything the day of the protests and the photos from that day never were really published any where.

December is looking like it is going to be slower for me than November. So far I have only published one article for Diálogo Chino on the incoming Biden administration and what it means for the new Geo-political struggle in Latin America. There is always the possibility that I will write at least one other piece this month, but it remains unclear and I honestly really need a vacation.

Anyways, give the piece a read.

Biden and the US-China-Latin America Triangle

This has been an odd year and per usual I’ve failed at updating this website. I’m hoping to change that in the new year. Here is my most recent work that came out in November and beginning of December 2020. Lastly I will be updating the photos in my portfolio in the coming weeks.