As One Year Ends, Another Begins 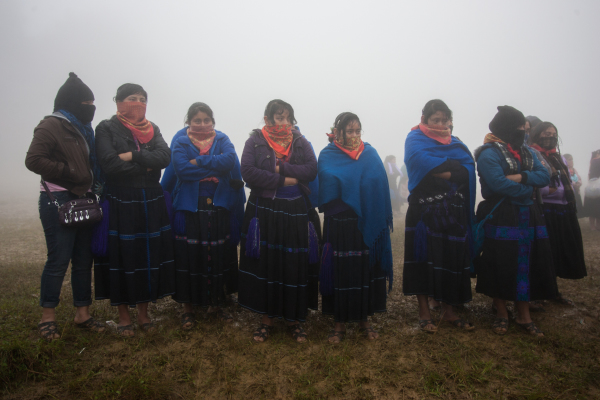 2014 has been quite the year, to say the least. I am amazed when I stop to look back at all that occurred this year.

The year began with me taking a change by returning to Mexico in hopes of collaborating with a wonderful journalist from Barcelona named Marta Molina who has been reporting from Mexico for several years. Together with a few other fellow journalists we attended the 20th anniversary celebration of the Zapatista Army of National Liberation, an indigenous movement that emerged in 1994 in the Mexican State of Chiapas – little did I know at the time that that night would begin me down this path toward a career in journalism. At the event I met an editor from New York, and we had a long conversation about my travels and experiences in Central America and the Caribbean. The following day we all met up at a restaurant, and I was introduced to Todd Miller, a journalist from Arizona, who asked me to write out one of my stories from Mexico – he has since become a mentor, along with Mexican journalist José Gil Olmos. He told me that he would have it published. Two months later in February of 2014, the North American Congress on Latin American published my first piece (actually it was my second, but we’ll still call it my first piece).

I would have stayed in Central America after that New Years Eve if things would have been different, but I had to finish university. I returned to Seattle in January to finish up my degrees in Sociology and International Development studies at Seattle Pacific University. I still had the opportunity to report while finishing university, which brought me to Chicago in May to attend a meeting of a coalition of teachers and students from Mexico, the United States, and Canada. These teachers welcomed me in to their struggle for public education, and became friends in the process. Many of the teachers from Mexico have since housed me as I have traveled through Mexico.

I made the decision prior to graduation to move back to Guatemala to report on the social movements there. I finally began the journey to my new home – and it has become my home – at the end of July. I arrived August 6, 2014 in Antigua Guatemala, and quickly moved into the house of some very dear friends. A week later I attended my first press conference about the community resistance of San Juan Sacatepéquez against a cement factory within their territory. It was here where I met one of the founders of Prensa Comunitaria, a Guatemalan independent news outlet – I have since become a part of the team, and become friends with the other reporters. It has been a slow process, but I have begun to work with communities in resistance.

One of the most important things that I have learned here in Guatemala is how critical of independent/alternative/autonomous journalism. Let me give an example: The 12 Kaqchikel Mayan communities that make up the municipality of San Juan Sacatepéquez have been in resistance to the construction of a cement factory within their territory. When a night of violence left 8 dead, the international and Guatemalan national media painted the situation as being a community on community attack. They focused on one family that lost 4 family members, completely leaving out the resistance, and the fact the cement factory had been arming paramilitaries to intimidate the residence. Furthermore, the voice of the community was left out entirely. This highlights the two sides of the Guatemalan reality: the side presented by the Government and business, and that of the afflicted, with the former controlling the narrative. It was the independent media here that was critical in giving the community a platform to share what really happened that night in September.

I’m regularly reminded of what my friend and comrade Alejandro said to me upon my graduation from University, “Journalism, my dear compa Jeff, is all about service. Serve to the ones whose voice is silenced by the ones that don’t want people to be listened. Be ready for hard (but wonderful) moments (i know you are).”And it has been a difficult year; the lows are low. Yet the highs, oh the highs. Financially speaking, journalism is a difficult thing to get into. We have to jump though the hoops of outlets, just to have our labor stolen from us, or have to wait 3-4 months for checks to arrive in the mail. Of the articles that have been published, I have been paid for three, for a grand total of 225.00 dollars. Supposedly I will eventually be paid for another article, but it has been nearly 5 months since that article was written. Despite this, I would not give up what I decided to do for anything. There have been many moments when I’m sitting in the back of a truck or in a bus thinking to myself how amazing this is (there is also the thought of “what am I doing?” But that is usually shrugged off fairly quickly.

So where do we stand at the end of this year? Well, I have written for 1 magazine (La Cuadra in Guatemala), 8 websites (6 in the United States, and two in Guatemala), 1 article was translated into Dutch, and Norwegian National Television has interviewed me about the indigenous defense of territory in Guatemala. I have met some of the greatest people; my friends and comrades here are wonderful. Also I live in buses.

2015 will begin in the same place that 2014 began: in the mountains of Chiapas in the Zapatista community of Oventik. Yet this year will be a different beginning, as I will be beginning to work directly with an amazing journalist and activist from Guatemala for the Oficina de Prensal para America Latina (OPAL) as a special correspondent and photographer. The New Year will also see my first contribution to a book being published on the effects of War and Neoliberal Policies on Children. Despite these opportunities, the financial piece still remains. OPAL is just now becoming an international outlet. We do not know if or when they will be able to begin paying us. Furthermore, I am not assuming that I will earn anything from the book contribution.

There is nothing I regret about my decision to take a chance and move to Central America. The last 5 months have only been the beginning. Things are moving along here. I thank each and every one of you for your love and support as I make my way down this path.

In case you are thinking “what can I do to support the work of independent, autonomous, alternative, community journalism from Central America and Latin America in general?“ Well, let me give you a couple of options (and please, if you can, lend some support!):